Some cool news from up north!!

On Saturday September 7th, I won “Skaidi Xtreme” for the 4th time in my career. This race has become within a short time one of the most recognised events in Norway. It takes place in a wonderful and really special landscape all up in the Norwegian Finnmark.

The race consisted of 3 laps of each time 15 km with 1200 meters of elevation all in all. Due to the really bad and rainy weather the day before the race, the track turned into a muddy field. Racing under these extreme conditions is really challenging as this race is taking place in the most northern part of Europe accessible on a bike. The town “Skaidi” is located on the same degree of latitude as Greenland (have a look at Google;-)). Only the warm Gulf current makes it possible for people to live up there. So it is really special! 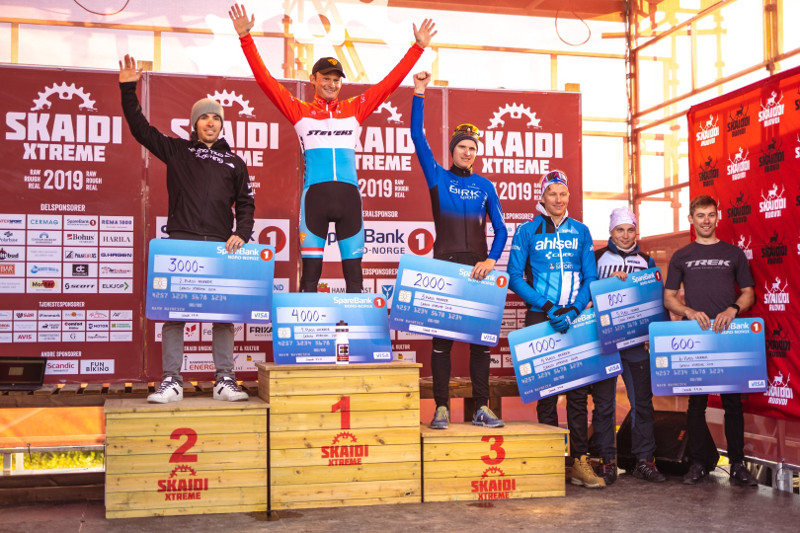 British champion Ben Thomas and Icelandic champion Ingvar Omarson were the guys to beat in this event. A really strong field so the tactic were full speed and attacking every little hill from the beginning on. Technically I am for sure not one of the best riders, but from the previous years’ experience, I knew that the only chance to win was to make the difference on pure power.

During the first half an hour we were mainly riding on a pretty flat terrain, which made it difficult for me to gain any advantage upon the other riders. After 10 km we started to climb the first hills of the day. I followed my plan and went as hard as I could up the hills. After an hour of racing only British champion Ben Thomas could follow me, but the rest of the competitors were still chasing us behind.

The race was still open and British champion Ben Thomas turned into a big problem for me!

I continued attacking him on each climb but it seemed like he was just a bit too strong. Only on the very last hill of the day I managed to get a tiny gap to Thomas. I kept on the crazy pace until the finish line where I could raise my hands as the winner for the 4th time in my career. At the end I only had less than 10 sec advantage to Ben Thomas. So a really tight and exciting final of this race!

The victory this year has become a must at this event, and people almost expect me to win again next year. In the previous years I have been winning in front of guys like multiple Cape Epic winner from Germany Karl Platt (2016). Norwegian champion Ola Kjöran (2015).

In the upcoming weeks I will be racing the world championship in marathon in Switzerland (22.09.2019) and after that I will be on the start line as defending champion at the Luxembourgish MTB marathon championship on October 13th.

Here a Link to the Skaidi Xtreme homepage: